Now launched yet another spectacular video slot from Net Entertainment entitled, The Invisible Man. Perhaps you have heard of this classic before? It is not surprising given that this gorgeous video slot based on the novel of the same name. It was written by H. G. Wells and was published in 1897. The novel is short, about a scientist, Griffin, who manages the feat of becoming invisible. And this is indeed a force that a lot had been safely used for a good purpose, but Griffin takes the help of their invisibility in a completely different way.

As usual Net Entertainment created an absolutely fantastic video slot both in sound and image. The graphics have a nice retro feel that fits perfectly. While the sound plays its role perfectly to the game. Among the symbols appear on the reels include the invisible man himself and the police are at his heels. In the background we can see the lab with various mysterious liquids. You will be impressed by The Invisible Man! 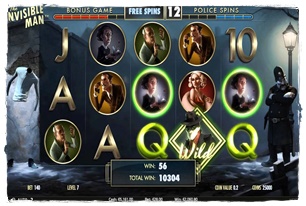 This game is loaded with various features. First and foremost, there are two wild symbols in the form of the police and the invisible man who is “walking the wilds.” Police begin on reels one and move one step to the right for each re-spin and also applies to Griffin, though he starts on Wheels five and moves to the left. Would the police and Griffin meet on the reels, 10 free spins will be activated and meet the once activated 4 free spins. In connection with these free spins, two meters appear. Depending on how you manage to fill them before your free spins is over, “Police Spins” or “Griffin’s Rage Bonus Game” is activated.

In The Invisible Man, you as a player the opportunity to take part of two bonus games, rapprochement firmly Police Spins Bonus Game and Griffin’s Rage Bonus Games – These two can only be activated during the free spins mode. At the Police Spins bonus game, you get three free spins to play for, and during those three free spins the five wilds placing on wheels. This is something that really brings the excitement of the game and increase your chances enormously. If you manage to play up to Griffin’s Rage Bonus Game, you instead start considering the business of trying to figure out what kind of profits that are hiding behind the various symbols. To help you get five different clues.

Police Spins means you get 3 spins where five wild symbols are randomly placed on the wheels. The bonus game is a thrilling story. You must namely comply with the three places where you should click on one of the five objects that reveal what you win! The Invisible Man is a video slot with five reels and three rows of symbols. You play with 20 fixed bet lines and two ways to win. The level of effort in the game adjusted between 1 and 10 while the coin value can be set between £0.01 and £0.50. The minimum stake in the game is £0.20 and the maximum bet is £100.

When autumn and darkness comes creeping say we casino enthusiasts, it is perfectly suited to play exciting casino games. The Invisible Man is a game of the ordinary and adds a mystical and a little eerie story that’s perfect for dark autumn evenings. To start playing The Invisible Man, just click here to go to one of our linked online casinos below, where you can also take part in other exclusive offers! 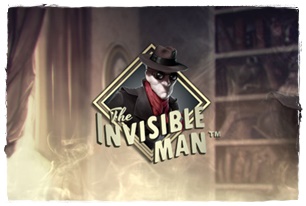