The actor, body builder and politician Arnold Schwarzenegger had to say the least, a significant breakthrough in his career when he took on the lead role in the blockbuster Terminator and cult phenomenon. Eventually, also a sequel that among other things called for “the world’s best sequel” who received the title Terminator 2: Judgement Day. Now it’s been more than 20 years ago this roll appeared on the silver screen, but today it is spoken. The success was therefore a fact and so it is perhaps not surprising that Microgaming has chosen to take on the movie to create a video slot based on the story.

In Terminator 2, Sarah Connor, after everything that happened in the first film ended up in a mental hospital and that means his son John Connor living in a foster home. The future will visit the dåtiden in the form of two so-called cyborgs. One of them has got a mission to do away with John by killing him while the other comes with the mission to protect him and keep him alive. As if this were not enough, you are also hunting for the person who is behind Skynet declares war on the world’s population. 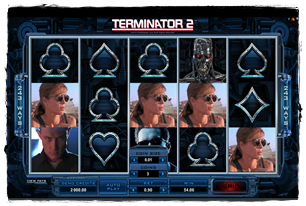 Terminator 2 offers not only a grand theme, but also a lot of exciting features that give the game that little extra. Like most other video slots also contains Terminator 2 a wild symbol which is here the game logo on a bed of flames behind. The wild symbol substitutes for other symbols to increase chances of winning, with the exception of the scatter symbol. Scatter in the game can be identified by a blue globe with lightning and scatter the word. You can not miss it! At least three scatter symbols will trigger 10 free spins which also involves special features. It will namely be added one more row to the game, which means that the number of positions increased to 20. This in turn means that 243 ways to win instead be 1024 ways to win. Then also cyborg T-1000 to change the game. Nowadays, he is like in the movie also change shape, so do not be surprised if he suddenly takes the form of, for example, John Connor. This is of course to your advantage because it will increase your chances of winning!

There is another bonus feature in the game called “T-800 Vision”. This bonus feature is activated randomly after a spin which did not give you any profit at all. You recognize the function, the game screen is bright red and you will suddenly be able to see the reels and symbols such as T-800 sees them. In this function, you win cash prizes as a symbol of high value stays on the reels and you can also trigger the free spins with a single scatter symbol.

Microgaming seems to have fallen for this by abolishing bet lines and run hard on “243 ways to win” concept instead. Terminator 2 is built namely the traditional five reels and three rows of symbols. But it has thus skipped bet lines and drive feature 243 ways to win. However, you may nevertheless decide the coin value and bet level. You set the bet level between 1 and 10 and you can choose to play with a minimum bet of £0.30 or a maximum bet of £30. You could say that video slot, Terminator 2, fits most player’s wallet.

Now, Terminator 2 after all these years also launched as video slot, from developer Microgaming. The manufacturer is one of the largest today, and we attach great importance to share the game with quality. So it is not surprising if you get stuck on this game if you do well give it a try. Terminator 2 is additionally a film that is well suited to take the step and become a video slot because there are events and characters that work kanonbra in this context. You will certainly also recognize the adrenaline pumping music from the movie along with the symbols among other things, consists of photographs of the characters from the movie. This is not a game to be thrown together in an afternoon. Quite the contrary, it will show that you have put in a solid work on creating a video slot of the top class! Additionally, you can also expect fancy animations when winning combinations and you would be tempted to dust Terminator 2 on the shelf for this game, it is not particularly surprising. 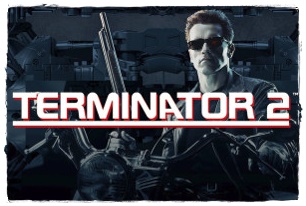