In the latest slot machine manufacturer NetEnt, you dive down under the sea, and get acquainted with the mythical Atlantis. Thus it is not surprising that the casino game also has the title Secret of Atlantis. Once again showing why NetEnt enthroned on top as one of the leading producers when it comes to online slots. Secret of Atlantis offers a beautiful graphics and the music played in the background while you are running the game is great. The combination of graphics and music contribute in other words, to a lovely and exciting gaming experience.

In the background is the famous Atlantis and among the symbols you see spinning the reels include mermaids, seashells with pearls, gemstones, jellyfish, crabs and turtles. The approach of the Secret of Atlantis is a little different because it consists of five reels and four rows of symbols instead of the traditional three. You can also adjust the level between 1 and 10 – in other words, fit Secret of Atlantis, the vast majority of players online. 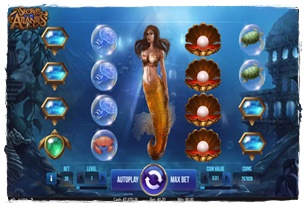 In August 2016 released a very exciting game from NetEnt (Net Entertainment). This time it takes one of the world’s largest game developers with us down on the ocean floor to explore the secrets of Atlantis – filled with bonuses and free spins! Secrets of Atlantis slot is obviously linked to the lost city of Atlantis that Plato mentioned in his writings. This city must have been on its own island and been by far the most powerful, but the amounts of gold, jewels and other valuable pieces. Through a volcanic eruption or the like, the whole island have gone in and thus disappeared Atlantis large quantities of gold and other – something everyone today looking for! How this legend is true or not we leave unsaid, but NetEnt offers first-class game fun while you can win large portions of everything nice that Atlantis must have left behind.

Now we come to the most interesting Secret of Atlantis! Let’s start with the bonus feature that NetEnt has chosen to call the “highlight”. It is as such that for each round you spin a highlight selecting random positions. This only applies to reels 2, 3 and 4. Would you have luck on your side, all the symbols on reels 2, 3 and 4 will be marked with “highlight” – then a re-spin to be activated with a colossal symbol.

We dive in a little deeper at what a re-spin with colossal symbols mean in the Secret of Atlantis! Once you manage to activate a re-spin turns reels 2, 3 and 4 to the colossal symbols. This can be described as a block of 3×4 symbols, and this is only valid for a re-spin. Depending on how the wheel stops, you get up either an entire colossal symbol or a part of it. You also have the option to re-enable even a re-spin, depending on how the colossal symbol lands after your first re-spin. The wild symbol in Secret of Atlantis is a so-called nudge wild and it is the mermaid who shoulders the role. Even nudge wild may seem completely or partially, depending on the wheel stops – if it is just a part of the symbol you will be pushed either up or down in order to thus be able to cover the entire reel. This also applies to re-spins when wild nudge also can be colossal.

Secret of Atlantis is the slot from NetEnt and the game has been worth the wait. Graphics and music are elaborate and detailed – something that enhances the gaming experience. But since it is so clear the bonus features that are perhaps the most exciting Secret of Atlantis. Nudge wild and colossal symbols makes you really should spin a few rounds if you have not done it yet!

Once again NetEnt has made a perfect video slot where you really get to enjoy beautiful graphics along with appropriate sound effects and entertaining animations. The Secrets of Atlantis slot you will have the opportunity to win lots of small gains and even a bunch of very large. Make sure to get wild on all wheels in the middle to really win big, and find all the treasures hidden in the forgotten city is way down on the ocean floor – Atlantis!