After the somewhat outrageous success of the gaming machine Jack Hammer, the NetEnt – one of the world’s leading game developers – invested in the sequel Jack Hammer 2: Fishy Business. It has become as much a success as the first edition of the casino game which is still a clear favorite on our site. Sequel has an equally fast pace and provides impressive 99 bet lines. Jack Hammer goes again on an eventful mission where he will deliver the beautiful singer, Pearl, who has been kidnapped by the villain, Don Crabby. Jack Hammer 2 is the sequel of the popular game Jack Hammer 1 and takes us on a new and exciting adventure with loads of free spins, scatters and and doubled profits! It is only a very small number of slot machines and video slots that have a sequel. 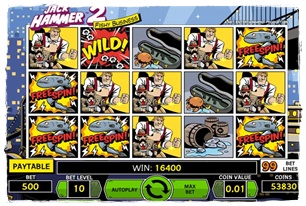 Even Jack Hammer 2 has the design of a cartoon comic book where the symbols saved up next to each other and form different stories. The background consists of a city at night lit by the large half-moon and the lights of the skyscrapers. In this slot game that spins all 15 icon boxes on the individual wheels. There are 99 pieces of fixed paylines. The symbols consist of signed versions of the game’s characters Jack Hammer, Singer Pearl, Villain Don Crabby and his companions called Goons. Jack Hammer and Singer Pearl are the symbols that can generate maximum profits.

The game’s wild symbol is not difficult to go to miss because it consists of text WILD. When the wild symbol occurs on any of the wheels as they replace all other symbols highest possible winning combination. The game also has a free spin symbol is an eel with lightning around him. Five eels anywhere on the reels will give you free spins, how many free spins you get depends on the number of symbols. What makes the free spins rounds even more valuable is that every win you get during your free spins rounds are doubled by the free spins multiplier.

During the free spins rounds, random wild symbols can appear randomly anywhere on the reels, replacing, like usual wilds, all symbols except the original wild symbol and free spins symbols. Random Wild thus creates even more winning combinations that benefits you as a player. Jack Hammer 2 has left the popular sticky win feature, which is also available in the original game, where it works the same. Sticky win enabled then at every win and make all symbols that are not included in the winning combination lines swirled again that make more and more profit combinations may occur.

Jack Hammer 2 is an enjoyable slot machine with a retro feel! Personally I like the approach of comic motifs, this goes well with the story about the mysteries and detectives, and thus maintained a clear, red thread the ball through. If you liked the previous edition will not be the least bit disappointed, Jack Hammer 2 is just as fun and there will also be more special features than ever before!

Join us for another adventure with Jack Hammer in the struggle to save The Singer Pearl and win great prizes! Jack Hammer 2 is available at most online casinos, and where there is the opportunity to play the game with or without deposit. So there are online casino that offers free play of Jack Hammer 2, allowing you to enjoy a great gaming experience without risk of losing any money. For gaming enthusiasts who enjoy the thrill of playing for real money, it is important to play at a casino that offers a safe and secure gaming environment. Then there are now one and the other casino online can be difficult to know which ones are good and which ones are better. We has made it as easy as possible for all players to find a casino that is just right for you. To the right is a list of recommended online casinos, where they can play in a safe environment also will receive offers that casino free spins, free casino bonuses and great promotions! 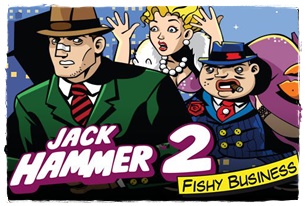