A hitman is the name of an assassin. Maybe you have already seen the film or played the video game with the same name? Anyway, it’s about the assassin Agent 47 as through the organization The Agency will be assigned to which he should murder. During a mission, it appears that he has fallen into a trap and eventually he gets both Interpol and FSB behind. Mystery thickens when he tries to find out who ordered the murder and it seems as if the client has already been murdered by Agent 47 earlier. 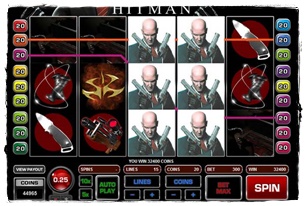 There are some special features in the Hitman who may want to know about so that you can keep your fingers crossed a little extra for them to be activated. To begin with, there is a wild symbol and it’s Hitman himself in person who shoulders the role. He can appear on reels two, three and four and will also expand to increase your winning chances. In addition, he replaces other symbols except for the scatter and bonus symbols. There is a bonus symbol is also the game that consists of a symbol with a special sign. Would this land on reels one, two and three, you will be able to choose one of the symbols and the profit that comes up will be tapped by the total bet. You can win up to a staggering 6000 coins!

Furthermore, you also have the chance to win free spins. The symbol of the sticker for the 18-year limit is the scatter symbol and if you get up at least three such, you win 18 free spins that is also equipped with a multiplier of x2. The feature called “Contract Bonus” is perhaps the man longs for most because it gives you the chance to win up to 270,000 coins! To enable this feature, you get a computer with the word Bonus on reels three, four and five. In this bonus game you will be able to choose who will be your target. You have five options to choose from and depending on what you kill, you will earn special bonus winnings. Your bonus win will be tapped by your total bet in the game round that triggered off the game and then you will go along to another room where you are assigned a random multiplier.

Hitman video slot is built up of five wheels, three rows of symbols and 15 bet lines. You can choose how many lines you want to activate and also you can and choose to wager between 1 and 20 coins per line. The coin value adjusts between £0.01 and £0.25 or equivalent currency. The maximum bet in Hitman is of £30.

It is the developer Microgaming behind the video slot version of Hitman and as usual has done a solid job of creating an excellent games. In the background you can hear the music that really does its job to create excitement in the game and even symbols are sharp. Here spins including syringes of poison, knives, notes and assassins. If you choose Hitman, you will be part of a truly awesome gaming experience even if you have not seen the movie or played the game before. 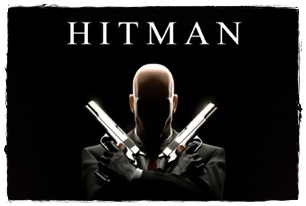