Imagine a traditional city like the one you usually see in the introduction to American movies. Throw in some funny characters in something resembling manga style at a construction site in the middle of everything. Then you get a small picture of the game developer NetEntertainments video slot Demolition Squad looks.

This video slot has a slightly different theme but as usual NetEntertainment not directly spared no expense when it comes to Nice graphics and background sounds that really fit the theme. Obviously, the scene where the wheels hanging scaffolding and symbols consist of various manga cartoon characters who will take the shape of various construction workers. The question is whether they do a good job on. Anyway, this is a video slot that you can certainly have fun with for a long time! 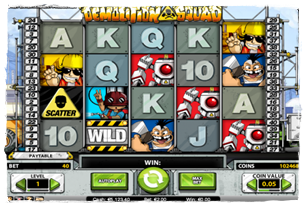 There are of course also some exciting features that give you even more enjoyment of the game Demolition Squad than just the theme and the graphics themselves. To begin with, there is a wild symbol that you recognize on a door adorned with warning tape black and yellow with the word “wild” on. This symbol replaces the usual other symbols to increase chances of winning, and can appear on reels two, three and four. Furthermore there is a wild symbol in the game, and this is called “Demolition Wild.” You can access it by the symbols that are between two regular wild symbols turn into Demolition Wild.

Many players appreciate free spins and then you have another reason to toss be eyeing the video slot Demolition Squads direction. There is namely free spins to download! Depending on how many scatters you get up, the number of free spins. Scatter consists of a black background with a yellow triangle consisting of the black silhouette of a head inside. Moreover, it is the “scatter” on it. Three symbols gives you 10 free spins, four symbols give you 20 free spins and five symbols gives you no less than 50 free spins! As if that were not enough tapped your wins during the free spins with three!

Video slot Demolition Squad is made up of five reels and four rows of symbols instead of the traditional three. You play with 40 fixed bet lines in the game and can adjust the input level between 1 and 10 and the coin value between £0.01 and £0.50 or equivalent currency. This puts the lowest possible effort to £0.40 and the maximum bet is £200.

Demolition Squad slot game is a cool game with a lot of action. A crazy bunch with the task of demolishing a very attractive case. The illustrations are red hot and you learn not to miss when you have made a profit on the Demolition Squad. This saves not pull any punches. Possibly confines itself to the younger crowd of customers and perhaps mainly boys and men who do not really outgrown “Crash Boom Bang” stage. Anyway ports Demolition Squad high on the list of video slot games. We like it a lot! The combination of free chances to Demolition Squad Free Spins, Bonus in the form of higher dividends and the high level of RTP also suggests Demolition Squad. 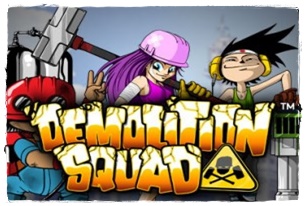